Create a captivating garden in your office 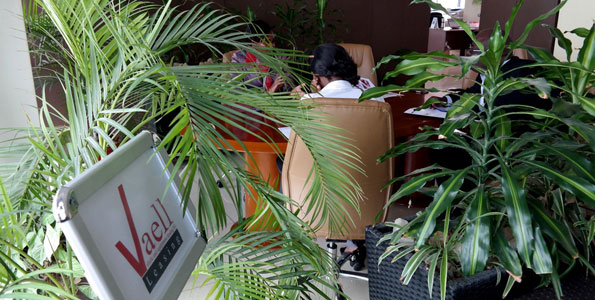 The atmosphere at Vehicle and Equipment Leasing Limited (VAELL) offices is captivating. The snow-white seats at the reception are complemented by the lush green of surrounding palm trees.

For a moment, the reception at Vaell’s premises on Mombasa Road appears to be swallowed in the sea of green. “My boss loves flowers. It also makes the air around the office fresh,” says Ms Mauta, Vaell’s corporate communications officer.

Although having flowers in the office is not a new concept, Vaell has worked magic with its flowers to bring out a great look around the office. The flowers are arranged in a line that partitions the entire office. They segment the reception area, which also serves as a waiting area and a small, open boardroom.

On the floor where most of the staff sit, flowers have been placed along the centre of the room, dividing the work stations. The main office is well lit and spacious with no crammed desks or chairs. This gives the flowers in the large pots more dominance as they are the first thing guests notice immediately they enter the offices.

According to Vaell MD Paul Njeru, an office has to be airy and the only way for that to happen is by having plenty of flowers.

“An office has to breathe. I think that is something we can’t compromise on. There are more plants in this office than people. There is actually a plant for every person and more,” says Njeru.

The blossoming flowers come with frequent care. Ms Mauta says they often take them out to get some sunshine in order to keep their lush looks. To do this, they have a landscaper who comes in on a weekly basis to tend to them.

Vaell also has an affiliate company located in Kitengela, which only deals in flowers. It costs the company about Sh 5,000 to keep the flowers blooming and looking good. But some plants are expensive. Like the seven-year-old palm tree which cost Sh50,000.

To create awareness on the importance of a green environment and to help employees develop an interest in the plants around the office, Vaell engages the staff in naming games. “We sometimes have a competition in the office to see who can name most of the palms since we have seven different types,” Njeru says.

Foliage in the office, no doubt, brings life to the serious, corporate environment by providing a pleasant, calm area for both staff and visitors.

However, the plants need good care. Regularly clean the flowers, take them out for sunshine and water them appropriately. In case of many flowers, it’s good to have one employee who is dedicated to tending them.

The choices of flower pots and flower types depends on what one wants to achieve. But make sure the foliage you settle for doesn’t require more sunlight than the office lets in.